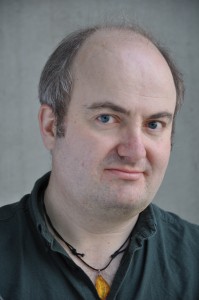 I was born in Derbyshire but grew up in Lowestoft, Suffolk before moving to Cheshire to study a degree in Creative Arts. Having worked as an electronic production editor for science and academic publishers in Oxford, I now work as a Web and Digital Media Officer for a university. I live in Oxfordshire with my wife Emma and our seven cats, four chickens, two bunnies and some fish.

I’m different. I’m not your usual person. Lots of people can say that about themselves but with me it’s true. Just ask my wife! I only discovered how different in the last ten years when I discovered that I have Asperger’s Syndrome, which is on the mild end of the autism spectrum. In subtle, subconscious ways it affects my writing. For someone who is, on occasion, somewhat clueless and inept in social situations, I have been praised on my dialogue. As a person I also have difficulty reading visual cues and body-language and consequently my editors often tell me I’m telling too much when I should be showing. Show not tell they say and I have to really work hard to achieve that! My favourite authors are Alan Garner, Diana Wynne Jones, Susan Cooper and David Almond.

In 1989 my short story, Gold, was highly commended in the WHSmiths Young Writers’ Competition and in 1991 I began writing screenplays, including a new children’s television series, Dreamscholars which received some initial interest from the producers of ITV’s award-winning Press Gang.

Whilst at university I co‐edited and contributed to Moments of Cragg Vale, an anthology of short stories and poetry, and in 1993, Flat East, a poem about the landscape of East Anglia was selected for publication in Valleys of Thought, an anthology of poems by local writers.

In 1995, a project proposal and pilot script for Riverhouse was highly commended in the Meridian Broadcasting Television Ideas Competition at the Southampton University Writers’ Conference. This led to me writing a youth drama series Eurojournal, based on my own experiences studying French at Eurocentre La Rochelle. The series was to be ground‐breaking in its style, with the use of rapid scene changes acting almost as metaphors for the advancement of the story – a style which developed into my novel‐writing style.

I have Icelandic family, and in 2001 I made the first of three visits to their country. I knew from the very beginning that with a country so rich in myth and folklore and with an environment unlike anything I had ever seen, I had to write a story set there. The End of All Worlds is that story – begun in August 2001 only to be halted on 21 October for one and a half years after the family home burnt down. It took six years to write and over three years of rewrites and edits to complete.

This site uses Akismet to reduce spam. Learn how your comment data is processed.